Swedish cuisine is called ‘husmanskost’ in Swedish, and traditionally includes simple countryside dishes, some of which are many hundreds of years old, others perhaps a century or less, and are still a very important part of Swedish everyday meals. Internationally, the most renowned Swedish culinary tradition is the smörgåsbord and meatballs much thanks to IKEA that made husmanskost accessible to people all over the world. Potatoes are a staple food in many traditional dishes and eaten year-round as the main source of carbohydrates.
This is a list of 13 must-try traditional dishes and pastry when visiting Sweden.

Cinnamon bun is a sweet roll. Its main ingredients are flour, cinnamon, sugar, and butter. The bun even has it’s own day October 4th, ‘kanelbullens dag’. Cinnamon buns are enjoyed during fika, which is a get together with friends. The average Swede eats approx. 316 cinnamon buns per year.

A semla is a traditional sweet roll made in various forms in Sweden. The semla consists of a cardamom-spiced wheat bun which has its top cut off, and is then filled with a mix of milk and almond paste, topped with whipped cream. The cut-off top serves as a lid and is dusted with powdered sugar.
The semla has an old tradition in Sweden. The name semla comes from the Latin word “simila” which means wheat flour. In Stockholm, the semla has been around since 1679. Initially, semlor was only eaten on the Feast day, that is, the Feast day before the fast. It still is the big Semla day but today, Swedes eat semlor from beginning of January to Easter. The Swedes eat around 40 million semlor during this period.

Tunnbröd is the Swedish version of flatbread and properly belongs to northern Swedish cuisine. Tunnbröd can be soft or crisp, and comes in many variants depending on choice of grain. Soft tunnbröd is commonly used as a wrap for other food, not unlike a crêpe or tortilla. A popular fast food dish is soft tunnbröd rolled around mashed potatoes and a hot dog, known as tunnbrödsrulle. 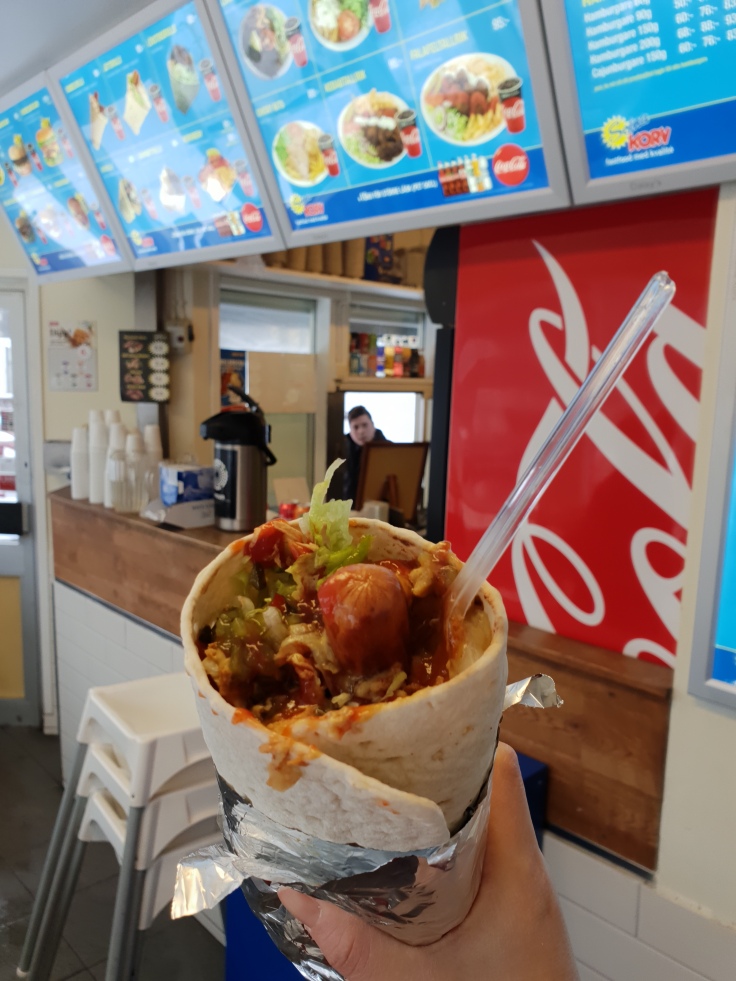 In Stockholm, you find lots of “korv kiosks”, hot dog stands, where you can buy Swedish fast food such as the flatbread roll, hot dogs and hamburgers.

The kebab pizza is a Swedish invention and my favorite pizza. The standard toppings on a kebab pizza are tomato sauce, cheese, red onion, fefferoni peppers, lettuce, tomatoes, kebab meat and, of course, kebab sauce. The kebab pizza is today considered a typical Swedish traditional food, and you can’t leave Sweden without trying it.

Also, you have to have pizza salad with the pizza. I have been to 80+ countries but I have never found pizza salad as tasty as in Sweden anywhere else in the world. It’s crispy, savory and tasty.

A simple dish very similar to hash, the Swedish version of Bibimbap. It literally means mixed food and are made from leftovers in the fridge. Traditionally consisting of potatoes, onions, and any kind of chopped or minced meat such as sausage, ham or meatballs, diced and then pan fried, it’s often served with a fried egg, pickled beetroot, sour pickled gherkin, capers and sometimes ketchup or brown sauce.

Kroppkakor is a traditional Swedish potato dumpling dish, boiled in water with filling of onions and pork or bacon. Kroppkakor are served with butter, cream and lingonberry jam. They are very rich so eating one kroppkaka is delicious, two are too much and three puts you in a coma.

Herring pickled by the use of acetic acid, water, sugar, ground allspice, red onion, carrot and salt, is the most traditional of Swedish appetizers. At Midsummer, the Swedes eat pickled herring, sour cream and chopped chives and potatoes cooked in dill. In restaurants, the dish ‘SOS‘ is a combination of four kinds of pickled herring, Västerbotten cheese, spiced cheese and boiled potatoes. SOS stands for ‘smör’, ‘ost’, and ‘sill’, which describes the main ingredients butter, cheese, and herring. The dish is usually eaten together with snaps (schnapps).

Open sandwich with prawns, egg and mayonnaise. Lettuce, tomato or cucumber are commonly added, usually topped with lemon and dill. Swedish prawns are the tastiest prawns in the world, salty and super delicious. Don’t miss out! 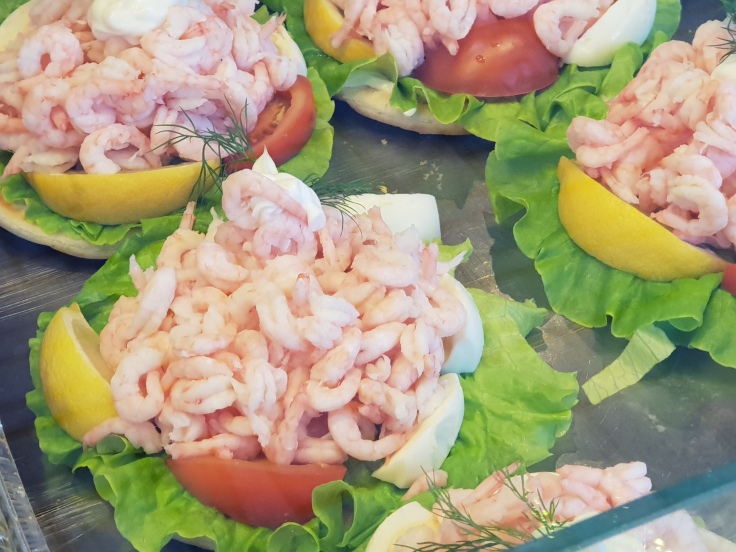 Meatballs made from minced meat and herbs tightly rolled together served with mashed potatoes, pickles and brown cream sauce is a favorite, especially among children. The dish is to be found on the menu of every restaurant in Sweden that serves traditional husmanskost. Meatballs is one of the many dishes included in the famous Smörgåsbord.

A classical Swedish dish consisting of fried pork belly with stewed brown beans. This was my parents favorite dish and I grew up eating it every other day and hence, today, I don’t fancy it as much. And yes, you eat the skin of the potato. It’s healthy and delicious.

One of the most traditional Swedish soups, ärtsoppa, is still served in many restaurants and households every Thursday, a tradition since the middle ages. Ärtsoppa is a yellow pea soup, a simple meal, a very thick soup with a little onion, salt and small pieces of pork, and served with Swedish mustard. Ärtsoppa is always served in combination with thin pancakes as dessert. 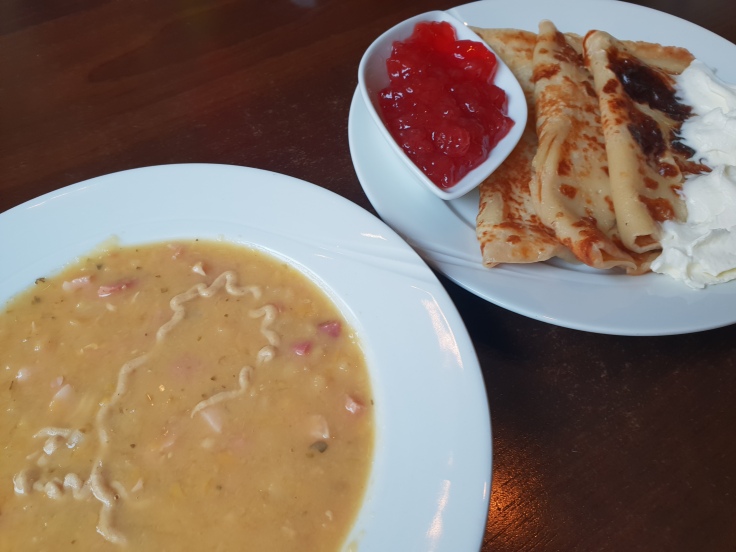 Raggmunk, or potato pancake, are shallow-fried pancakes of grated or ground potato, matzo meal or flour and a binding ingredient such as egg or applesauce, often flavored with grated garlic or onion and seasoning. They are enjoyed with cured pork belly and topped with a variety of condiments such as lingonberry jam.

Smörgåsbord is a buffet of hot and cold dishes. These days the Swedes eat Smörgåsbord in the weekends for brunch. Most of the bigger hotels and a some restaurants serve Smörgåsbord with traditional Swedish food. It’s quite expensive, but there are lot of dishes and you spend a few hours eating away.
It’s customary to begin with the cold fish dishes which are generally various forms of herring, salmon, and eel. After eating the first portion, people usually continue with the second course of hot dishes and round off with desserts.
After finishing a smörgåsbord you need to lay down and rest. The food is very filling and will put you in a coma if you go all in. Nevertheless, smörgåsbord is an old Swedish tradition so I definitely recommend to have a go at it when you’re in Sweden. 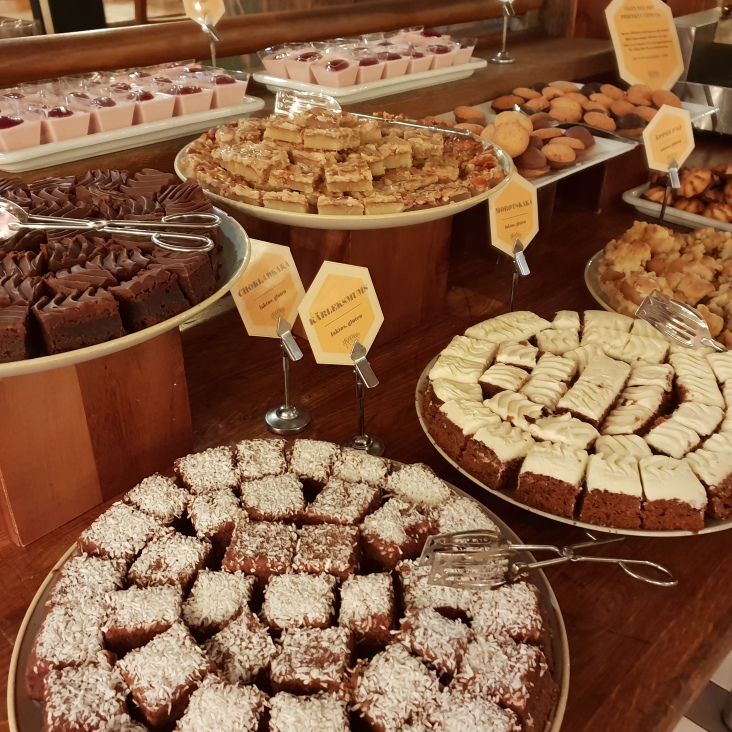